Alex Marin ‘06, the director of strategy and business intelligence at Activision Blizzard, spoke with Milstein Program in Technology & Humanity students on Oct. 21 about his career in game design. Marin’s session was part of the Milstein Program’s “Future You Speaker Series” which features current Cornell students and alumni who have launched projects and careers at the nexus of technology and the humanities.

Marin and his team research the industry, market trends and competitors to advise senior leaders on business strategy for the video game company. Marin’s favorite part of his role is the work between business and studio, translating key elements of the design process to the business side of the company and translating business aspects to the artists and developers. He is also the founder and co-chair of the Latinx@Activision diversity network.

“I basically get to be a professional video game nerd” Marin joked. “I bring framing from the business perspective so that the executives can understand [their] vision.”

As an undergraduate, Marin was always intent on working in the gaming industry and came to Cornell as a computer science major in the College of Engineering. Although he had originally planned to focus on the technical side of gaming, his studies here helped him confirm he didn’t want to be a programmer and realized that pivoting to a film studies major to focus on design was the right move.

“In the absence of a gaming major, I knew I needed to understand tech and design,” Marin said.

Marin said as a student he felt the need to choose between his dual-natured interests in technology and the humanities. He expressed excitement about the Milstein Program’s place on campus as a program dedicated to creating a bridge between STEM and humanities disciplines.

During the Q&A, Milstein student Ryan Tremblay ‘22 helped launch the group into a discussion about the future of the games industry. Specifically, Tremblay was curious to hear Marin’s thoughts on how the game industry would be affected by the rise of subscription-based access to viewable content, like film and television.

“Listening to his insights about the future of cloud, mobile, and subscription based game industries was fascinating,” Tremblay said.

Launched in 2017, the Milstein Program offers a unique multidisciplinary curriculum to students in the College of Arts & Sciences, with workshops in design thinking, community engagement and technology topics, and two summers spent at Cornell Tech in New York City. 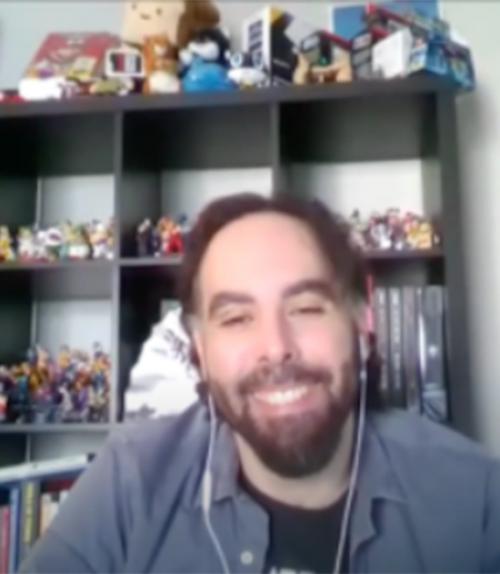