Annie Lewandowski’s installation performance, “Siren – Listening to Another Species on Earth,” which she previewed on Martha's Vineyard in August, incorporates a 40-minute selection of humpback whale songs she recorded with Katy Payne in Hawaii in 2019.

Humpback whales sing primarily during their breeding season. Now the Cornell community has a chance to listen and learn, and even sing along.

“The Whale Listening Project,” which runs Sept. 23-26, is a four-day immersion in the beauty of whale song and a celebration of the 50th anniversary of the best-selling 1970 album, “Songs of the Humpback Whale,” co-produced by pioneering bioacoustics researchers Roger Payne, Ph.D. ’61, and Katy Payne ’59, a retired research associate with the Cornell Lab of Ornithology’s Bioacoustics Research Program.

That album introduced the sophisticated, highly structured songs of whales to the world and helped launch the Save the Whales campaign, which resulted in a global moratorium on commercial whaling.

“I think that recording is a testament to the fact that beauty can change the world,” said the event’s organizer, Annie Lewandowski, senior music lecturer in the College of Arts and Sciences.

“The Whale Listening Project” includes a whale-song installation at the Johnson Museum of Art, an immersive workshop and a rare joint lecture featuring Roger and Kay Payne. 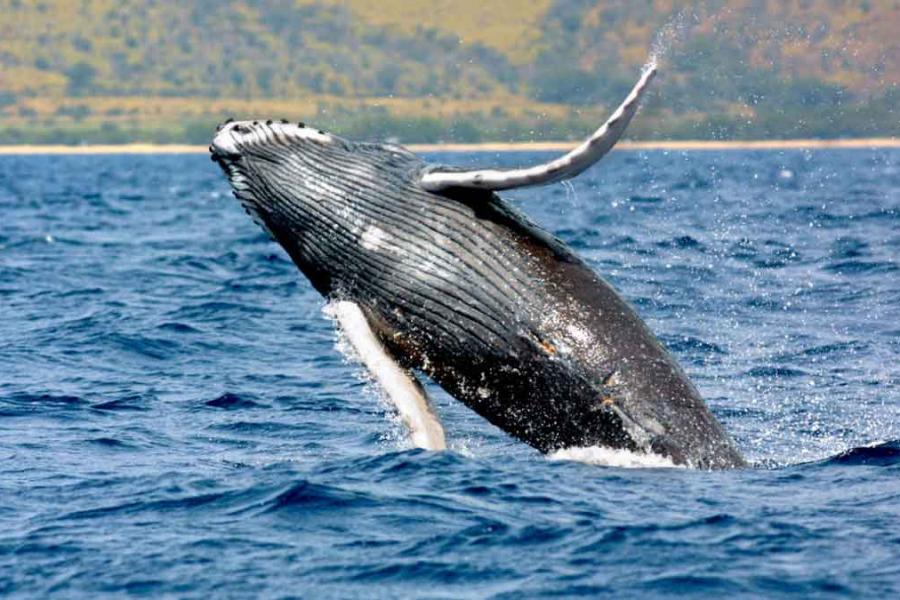 Cornell will host “The Whale Listening Project,” Sept. 23-26, in celebration of the 50th anniversary of the best-selling 1970 album, “Songs of the Humpback Whale,” co-produced by pioneering bioacoustics researchers Roger Payne, Ph.D. ’61, and Katy Payne ’59.

The project grew out of a 2019 collaboration in which Lewandowski and Katy Payne traveled to Hawaii with support from the Cornell Atkinson Center for Sustainability to record a new selection of humpback songs. They intended to incorporate those songs into a performance and public lecture that would commemorate the album’s 50th anniversary in 2020, but those plans were delayed by the pandemic.

The postponement gave Lewandowski extra time to develop her installation performance, “Siren – Listening to Another Species on Earth,” which will be displayed at the Herbert F. Johnson Museum of Art, Gallery Eight, Sept. 23-26.

Like the “Songs of the Humpback Whale” album, Lewandowski wanted to represent “the beauty of the interior world through the creative mind of the singer” as well as “the harsh external reality” that whales face.

Lewandowski took her recordings from Hawaii and used software developed by the Lab of Ornithology to annotate a 40-minute selection of humpback whale songs, identifying unique sound units, phrases, and themes. Then she turned to artist and coder Kyle McDonald, whom she had worked with on a Google Creative Lab project, Pattern Radio: Whale Songs, which used artificial intelligence to recognize patterns in whale songs.

McDonald combined Lewandowski’s annotations with machine learning to create a visual accompaniment, with rich pulses of color illuminating the voices of three whales as their songs are played through an array of speakers.

The effect is to “give listeners an experience of being immersed in humpback song,” Lewandowski said.

The colors are projected on a sculpture, designed by collaborator and set designer Amy Rubin, comprising several hundred pounds of ropes, nets and other marine debris that Lewandowski collected from the Center for Coastal Studies in Provincetown, Massachusetts.

“Marine entanglement is a huge threat to marine mammal populations in the Gulf of Maine, and it’s one of the leading causes of death of the North Atlantic right whale here in the Northeast,” Lewandowski said. “I was inspired to think about the external world of the humpback singer now. There’s a kind of unintentional whaling today.”

Lewandowski and McDonald will discuss the inspiration behind their installation during a panel event, “Hawaiian Humpback Whales: Scientific and Creative Perspectives,” Sept. 24, 3-4:30 p.m. at the Johnson Museum Lecture Hall, which will also feature Hawaii Marine Mammal Consortium biologists Chris Gabriele and Adam Frankel.

The centerpiece of the project will be the Paynes’ keynote address, “The Ever-Evolving Songs of Humpback Whales,” Sept. 23, 7-8 p.m., followed by a Q&A, at the Johnson Museum Lecture Hall.

Roger Payne will discuss the discovery of whale songs and the resulting social and political impact, and Katy Payne will present some of their findings about the whales’ songs and how they change over time.

Katy Payne will also be leading a workshop with singer Daniela Gesundheit, Sept. 25, 10:30 a.m. to noon in Lincoln Hall B20, in which participants can learn the compositional techniques and structures used in humpback whale songs and vocalize the songs together. The workshop will be limited to 35 participants on a first-come first-served basis.

The keynote address and panel will offer virtual access. All events are free and open to the public.

While it has been 51 years since the world first heard the deep, resonant songs of humpbacks, and the album’s conservation legacy is secure, “Songs of the Humpback Whale” still has a lot to teach us, Lewandowski said.

“At these events, I hope that people both enjoy the beauty of these incredible whale songs, and they also feel moved to get involved in protecting these ancient marine mammal relatives of ours.”

The project is supported by the Cornell Atkinson, the Cornell Council for the Arts, the Milstein Program in Technology and Humanity, Media Art Xploration, the Johnson Museum and the Department of Music.

Read the story in The Cornell Chronicle.

Cornell launches $5B campaign ‘to do the greatest good’

Community of practice explores digital storytelling in the classroom