Life in the Slash: a Talk with Professor Chris Csikszentmihalyi

On Feb. 16, the Milstein Program hosted a talk with Designer/Technologist/Critic/Professor Chris Csikszentmihalyi in conversation with Milstein Program director Austin Bunn to discuss his career in alternative and critical technologies.  The audience included students from a broad range of academic disciplines who, like Csikszentmihalyi, “live in the slash” of technology/art/engineering/society.

To borrow Bunn’s phrase, Csikszentmihalyi is something of a renaissance man. Now an associate professor of information science at Cornell, he started off as an anthropology undergraduate at Reed College before deciding to take time off to work as a design consultant.

He became frustrated at the state of the tech industry - designs that seemed so cool in the research space became boring before they got to market.

To find out why, he researched tech development processes and ideologies and found that engineers were often accountable to people with power and money. This was the type of responsibility he wanted to avoid.

“I thought to myself, if engineers are ultimately responsible to power, who are the least responsible people in the world?... and this is how I went to art school.”

His first work of art, hunter hunter, was inspired during Slovenia’s secession from Yugoslavia in the early 90s. The design - a quadripod which triangulates the sound of a gunshot, classifies the sound, and then responds by firing a 88mm cannon at the source of the first shot - intended to counter the inflammatory impact of U.S. military action. But he found that when the piece was displayed at exhibitions people inquired after applications of the technology, sometimes even hoping to invest in it, perhaps even for military or police purposes. To a crowd of technology and humanities students, this was a familiar example of how technologies created can have very different impacts: from war critique to instrument of war.

Csikszentmihalyi discussed a number of other technologies he was involved in, from RootIO - an accessible community “radio in a bucket” controlled by an Android phone - to Between the Bars: Human Stories from Prison - a platform for people to send letters from incarcerated family members to be scanned and put online. This site is still active today at BetweenTheBars.org.

While he was developing these technologies, Csikszentmihalyi was also founding the MIT Center for Civic Media, based on the premise that technologists were skilled at “afflicting the comfortable,” but that there was a real need to “comfort the afflicted.”

While at MIT, Csikszentmihalyi supervised a project by student Jeff Warren, who noticed that satellite imagery used for sites like Google often underrepresented low-income areas. With this in mind, Warren launched a “one satellite per child” effort that allowed children to take aerial photos which communities could then use to create address systems and argue for better public transportation and sanitation infrastructure.

“The “discussion of the cost-effective mapping technology that was integrated by Google was a welcome reminder that it does not always take massive resources and politicking to affect substantial, positive change,” said

Some students, like Chukwudumebi Joshua Obi ’23, another Milstein scholar, were inspired by Csikszentmihalyi’s career route.

“Attending the talk was very educational,” Obi said, “as I heard from the professor on the ways people can use technology to help people that does not require us to ‘sell or market’ or otherwise impose our ideas of what a solution looks like.”

Hal Reed ('23) is a History Major in the Milstein Program in Technology & Humanity.

Launched in 2017, the Milstein Program offers a unique multidisciplinary curriculum to students in the College of Arts & Sciences, with workshops in design thinking, community engagement and technology topics. 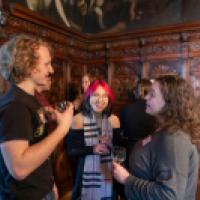