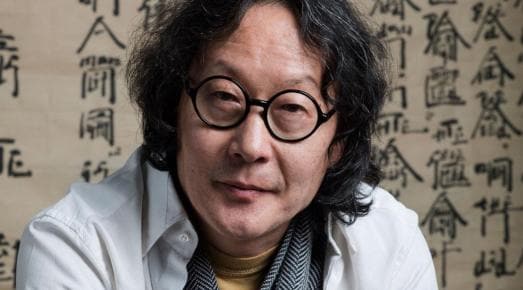 Milstein Program students will have the opportunity to meet with Xu Bing for an informal "Talk Back" event and dinner.

XU BING (2015-2021)—is a Chinese-born artist whose artistic and cultural interventions touch on the fields of public and ecological art, printmaking, new media installations, drawing and sculpture.  Professor Xu Bing resides both in the US (since 1990) and Beijing, where he served as Vice President of China’s Central Academy of Fine Arts (CAFA), Beijing, China, and recently begun a new chapter at CAFA as Professor with responsibility for graduate students. His biography charts the path of international influence of Chinese contemporary art and its complex place in Chinese politics over the last forty years.  After having been relocated to the countryside for two years at the end of the Cultural Revolution, Xu Bing took his BA in 1981 from the Central Academy of Fine Arts, Beijing (CAFA) where he stayed on as instructor, earning his MFA in 1987.  He then devoted four years to creating more than four thousand “fake” Chinese characters (radicals of the Chinese characters were recomposed to construct non-existent fake Chinese characters).  The resulting work, “An Analyzed Reflection of the World-The Book from the Sky,” was presented in 1988 in the first major group exhibition of contemporary art in China, “China/Avant Garde,” in Beijing.  Profiting from an invitation by the University of Wisconsin-Madison, he moved to the United States in 1990, after which he quickly established himself as a major figure in the international art world.

Secretary of State, John Kerry, recently awarded (January 2015) Xu Bing the U.S. Department of State Department Medal of Arts for his contributions to the Art in Embassies Program.  He is the recipient of a MacArthur Fellowship (1999), Fukuoka Asian Arts and Culture Prize (2003), the first Wales International Visual Arts Prize, Artes Mundi (2004), a lifetime achievement award from the Southern Graphics Council (2006) and a doctorate of humane letters by Columbia University (2010).

He has presented solo exhibitions at venues worldwide including the Arthur M. Sackler Gallery (Smithsonian Museum), Washington, D.C.; the New Museum of Contemporary Art, New York; the Joan Miro Foundation, Barcelona, Spain; the National Gallery of Prague; the Spencer Museum of Art. University of Kansas at Lawrence; the Taiwan Museum of Fine Art; and the H.F. Johnson Museum of Art at Cornell.  He has also exhibited at the 45th and 51st Venice Biennales, the Biennale of Sydney and the Johannesburg Biennale, the Metropolitan Museum of Art and Mass MOCA in West Adams, Massachusetts.  The locations of other onsite installations include The Cathedral Church of St. John the Divine in New York City; and the John Madejski Garden at the Victoria and Albert Museum; Chatsworth House, home of the Duke of Devonshire, UK; and Museum of History, Taiwan.